When I first found out about Gareth’s & Calvin’s new business venture I knew I wanted to do a little story on them and spread the word, as its these kinds of ventures that make me super excited! I do my best to buy from individuals and smaller enterprises but sometimes convenience gets the better of me and I end up shopping where I don’t necessarily want to shop. So, when I found out that Caught Online – their Fishy Business (lol – couldn’t resist) would deliver excellent quality seafood to my door I jumped at the chance to chat to them and share their story as well as to sample some of their offering.

As a family we LOVE seafood but struggle to find high quality and decent priced seafood regularly. I have a few contacts at the Granger Bay market, but we can’t get there all the time either so the idea of having high quality seafood available in my freezer really appealed to me. Now as a foodie I am a fan of using fresh produce rather than frozen, but I do appreciate that this is not always possible and actually – if the seafood and fish is frozen at sea (literally just after its caught) then the quality can be just as good – in fact sometimes better. This is all explained very well on the Caught Online website: When fish is properly frozen within hours of being caught, whether it be at sea or as it arrives on land, it preserves freshness from that moment. Essentially, pressing pause on time. For example, our tuna is harvested, hand-filleted and flash frozen in under 10 minutes at -60°C to lock in the freshness.

I know I don’t need to explain to anyone who reads my blog why its important to support local – or why its better to buy from people than corporations so I will keep my rant short and sweet. The business landscape in general is tough – and when it comes to food the big retailers dominate the market and make a point of squeezing both the supplier – and the customer- while their margins become fatter and fatter. The only tools we have in our box to put pressure on them is to vote with our Rands and put our money where our mouths are. So, any opportunity to support local small businesses should be seized with vigour! 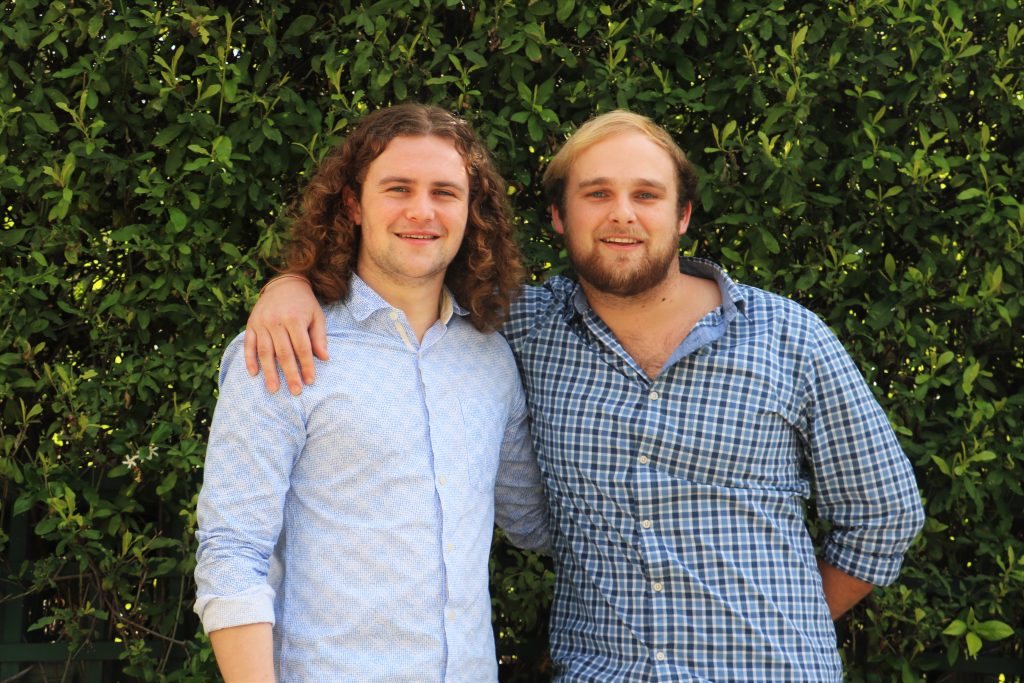 Calvin & Gareth are brothers who grew up in a family where seafood was almost always the protein of choice in large part due to their father who worked in the fishing industry, but it was only as they got older did they realise that not everyone got to enjoy seafood the way they did. They also spent many a weekend and holiday on the Breede River where fishing was the main activity they enjoyed and so working in this fishy space seemed like the obvious choice as they became experts by default and also have a deep passion for it. Fresh out of varsity and both of them skilled up, the realisation that working for someone else would come with its limits prompted them to jump into the deep end (sorry I can’t resist all these puns) and start their own niche seafood business with an emphasis on high quality “seafrozen” seafood. I had to ask what this meant despite perhaps it being obvious and learnt in the process that lots of “fresh” fish and prawns are often on boats for days before they are taken to land to be frozen there hence compromising the quality.

“Sea-freezing or super-freezing followed by controlled thawing keeps the fish super fresh and this is because when fish is properly frozen within hours of being caught, whether it be at sea or as it arrives on land, it preserves freshness from that moment. Essentially, pressing pause on time. For example, our tuna is harvested, hand-filleted and flash frozen in under 10 minutes at -60°C to lock in the freshness”

All the products that they delivered by were packaged neatly and in decent sized portions (200g for fish fillets) and some in packs of 4 which meant it was super easy to store them until I was ready to use them. And for all my friends who are nervous to clean and gut fish – you won’t have any of those issues here, even the calamari was super clean and ready to defrost and cook with a nice combo of heads and squiggly tails that crunch up so nicely. It says on their website (which by the way is very easy to navigate and use) that the 500g Calamari packet was enough for 2 but my family of 4 were totally satisfied with this amount, I guess it depends how many growing lads you have to feed! 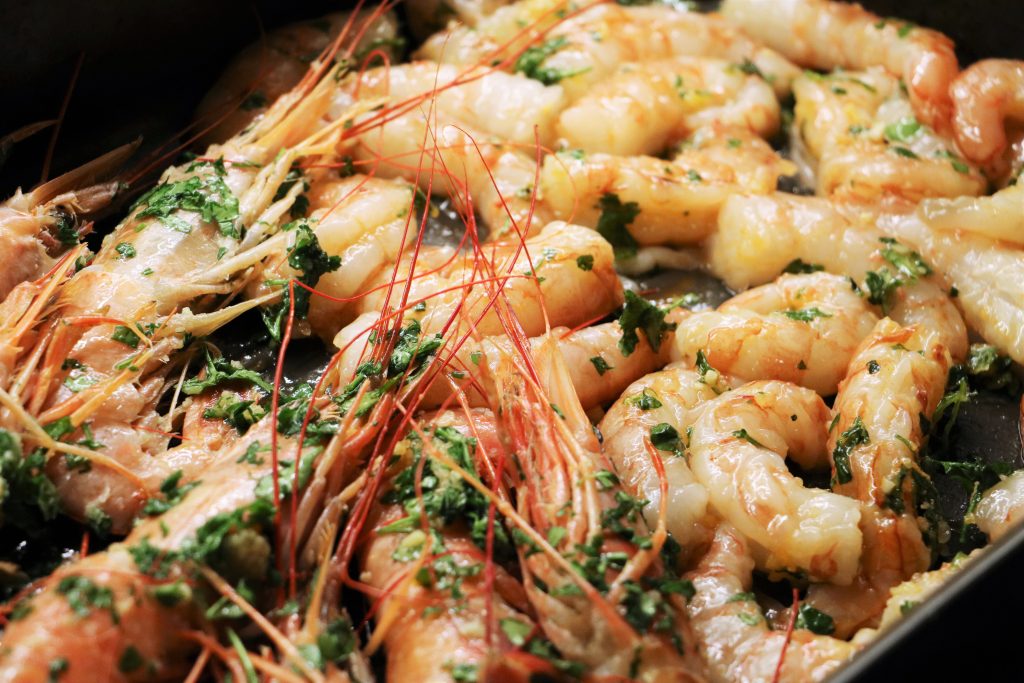 A special mention HAS to go to the GORGEOUS juicy big pink prawns they had bought with them and I noticed immediately that there were no icy clumps stuck to them. Apparently, this is called glazing and both brothers believe that compromises the quality of the seafood which makes sense as ice crystals can change the flesh as water freezes it expands etc… plus you are essentially paying extra for water! I also noticed that the prawns were from Argentina and not India as is usually the case in SA and again both Gareth and Calvin believe that these prawns are superior as they are wild caught and again – frozen at sea to ensure freshness. It is not easy to find decent sized prawns either, but these were just spectacular, and the flesh was so juicy and sweet – like mini lobsters. The recipe card they gift with these prawns is a classic recipe to enjoy them as they are (and it might seem like a shame to cook them any other way) but I couldn’t resist the idea making a prawn risotto. Its winter after all and risotto is the ultimate comfort food for me 😊 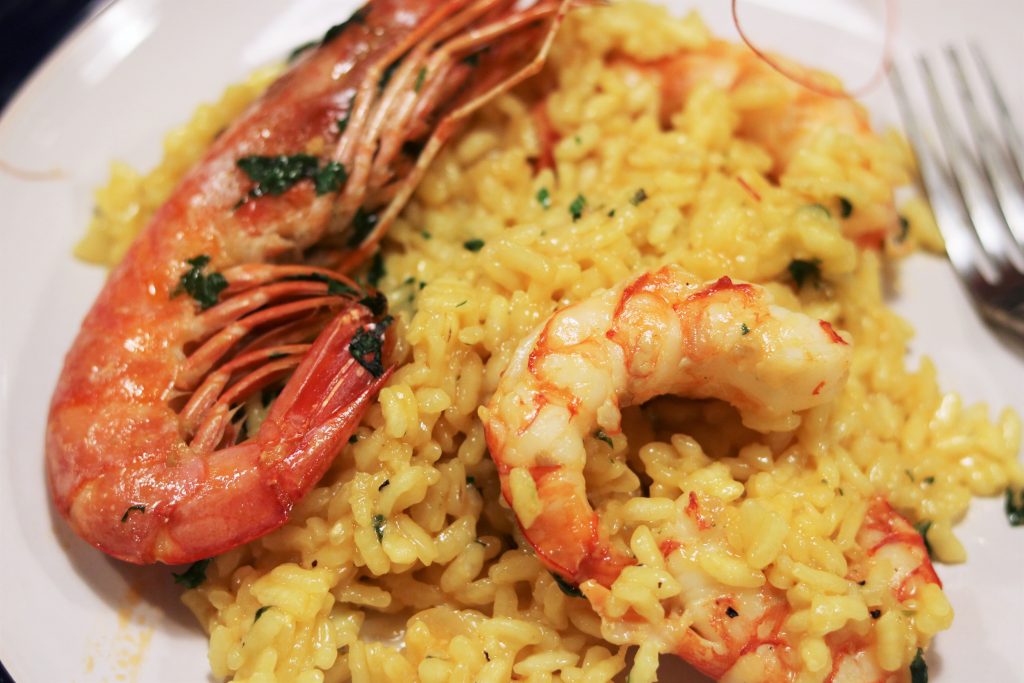 The link to my Saffron Prawn Risotto is below 🙂

Right now, the delivery area covers Cape Town, Southern suburbs & the Northern suburbs and its free if you order over 250zar which makes sense to do as you can just store the seafood in your freezer. Another bonus is that you will be doing your bit for the environment as fresh fish is often transported by air, emitting a relatively higher amount of CO2 than other forms of transport such as boat or truck (generally how frozen is transported).  The brothers add: To put this into perspective, it is estimated that by using air transport generates up to 10 times more greenhouse gases compared to moving them by container ship.

I tried the Prawns which were exceptional – honestly have not had quality like that in forever, the Kingklip ended up in a tagine style Moroccan sauce to keep it juicy, I pan-fried the calamari in chili and garlic and also tried it fried and for the tuna kept it simple with searing it in a sesame seed crust and serving it with an Asian inspired dressing. 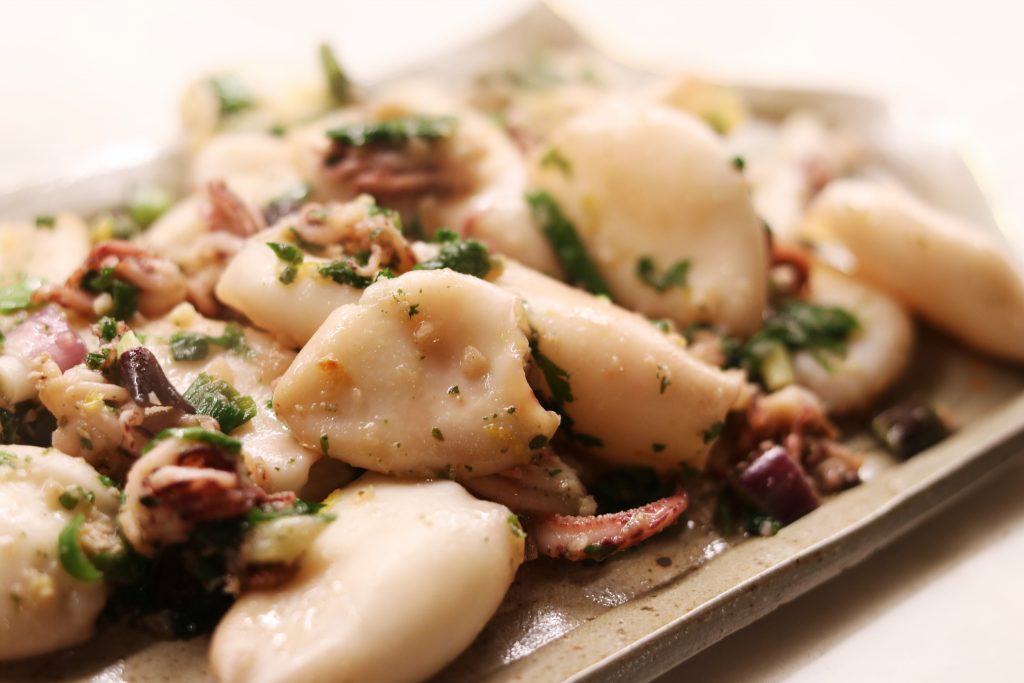 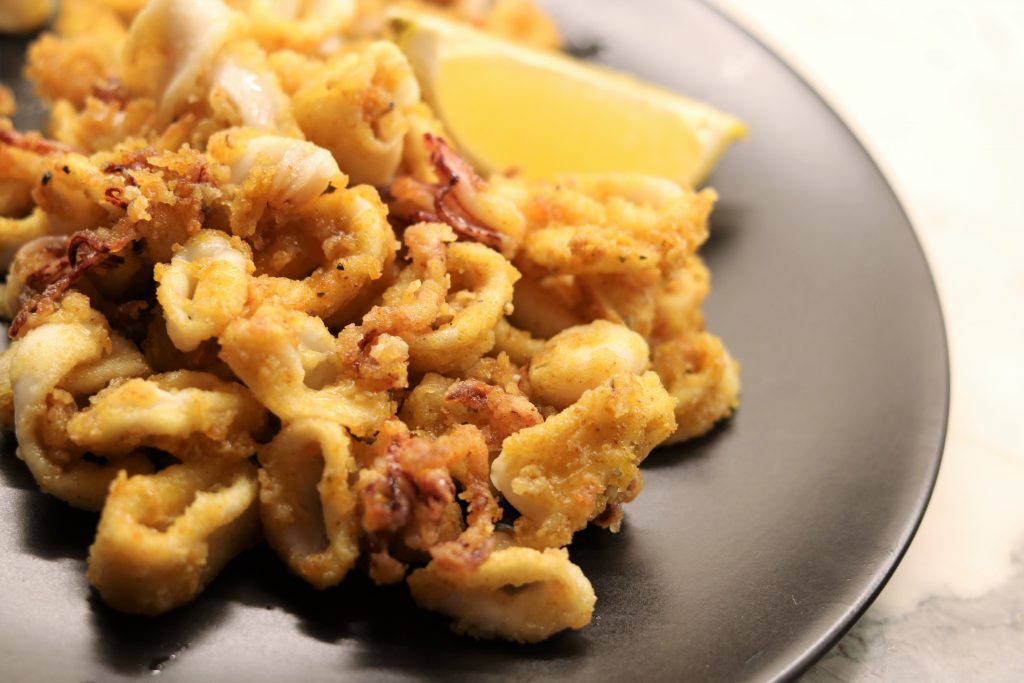 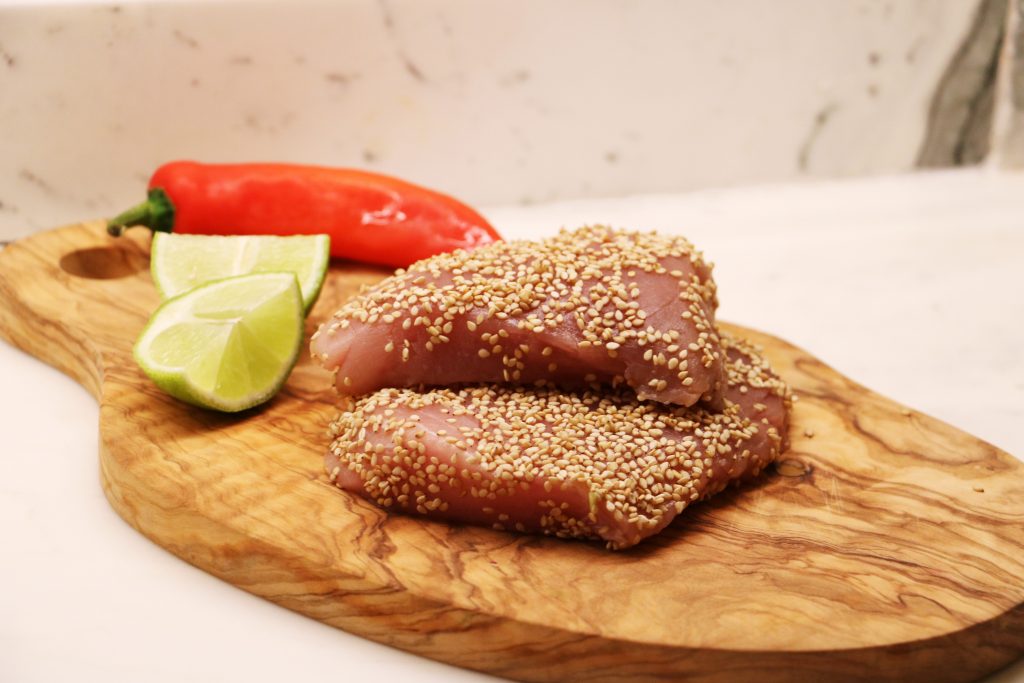 Pressing the sesame seeds into the tuna gives it a nice crust and the seeds caramelise slightly which is delicious! 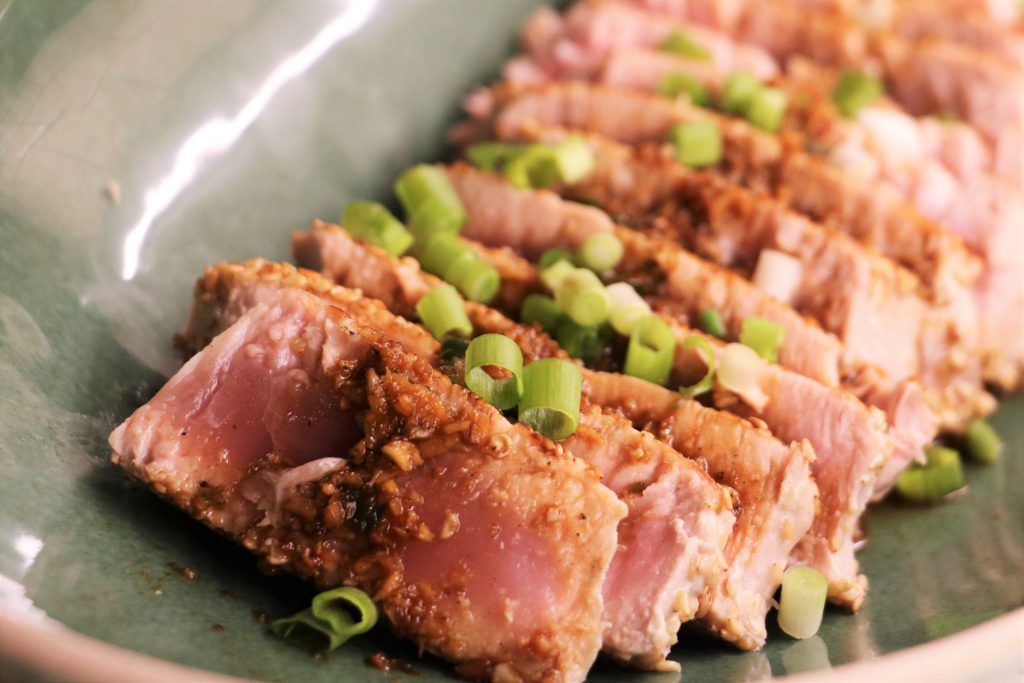 An oriental inspired dressing goes so well with seared tuna! 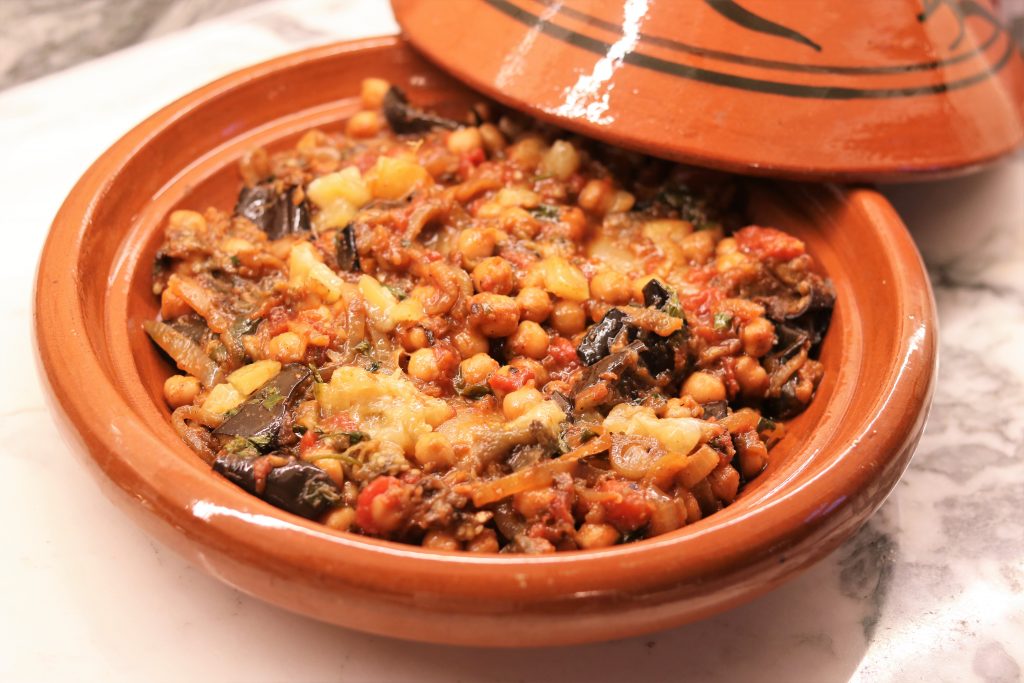 Moroccan spices, preserved lemons, chickpeas and aubergines made this fish tagine a wholesome & filling meal just as it is.

The enthusiasm that both young men have for their business is infectious and I have no doubt that many more of us will steadily be caught online shopping at Caught Online (okay I promise to stop now!). I will definitely be ordering the prawns and calamari again and am going to try their prepared mussels which are cultivated in the unpolluted, pristine seawater in Saldanha Bay which is known for growing some of the best mussels in the world. I have never cooked with frozen mussels before, but the boys definitely convinced me! My favourite way to cook them is in a fragrant coconut Thai sauce (recipe on blog…) 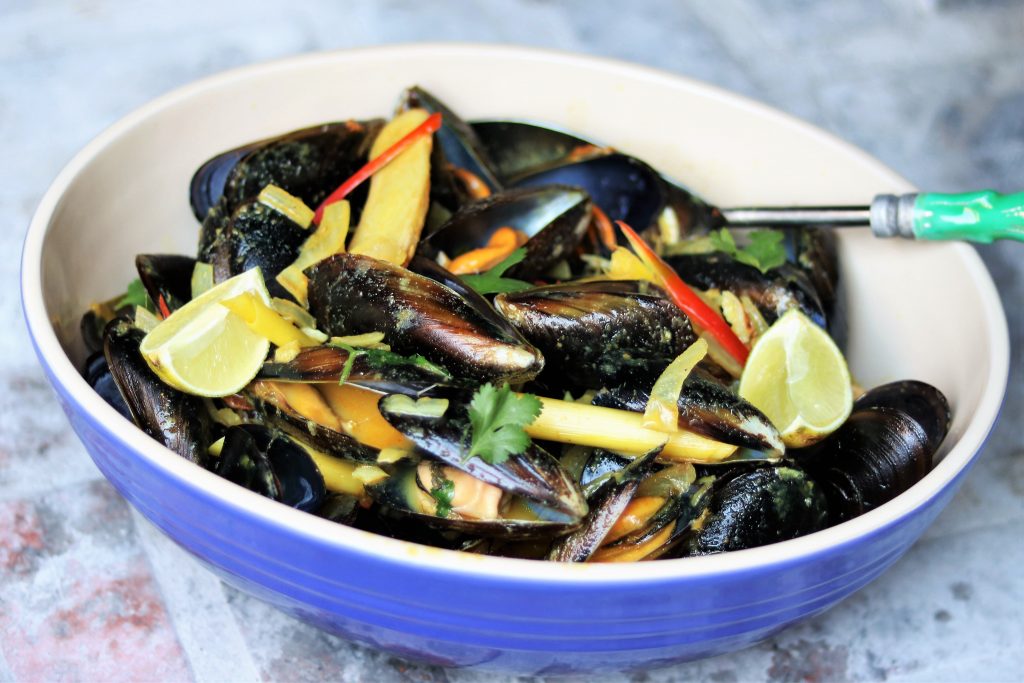 My fragrant Thai mussel recipe is such a winner!!

Although I love mussels the hassle of all the cleaning etc… puts me off, so the Idea of these mussels already being cleaned, opened and ready to go appeals greatly!  These mussels are flash frozen soon after they are caught and processed perfectly locking in the flavour, moisture and nutrients plus they look really plump and juicy, so I can’t wait to try those.

I also see they have recently added a range of Norwegian Salmon products which appear very reasonable priced indeed and love the fact I can buy a whole side and not just fillets. Anything that makes eating healthier – easier – is a win-win for me!

If you have any questions don’t hesitate to give Calvin & Gareth a shout at www.caughtonline.co.za